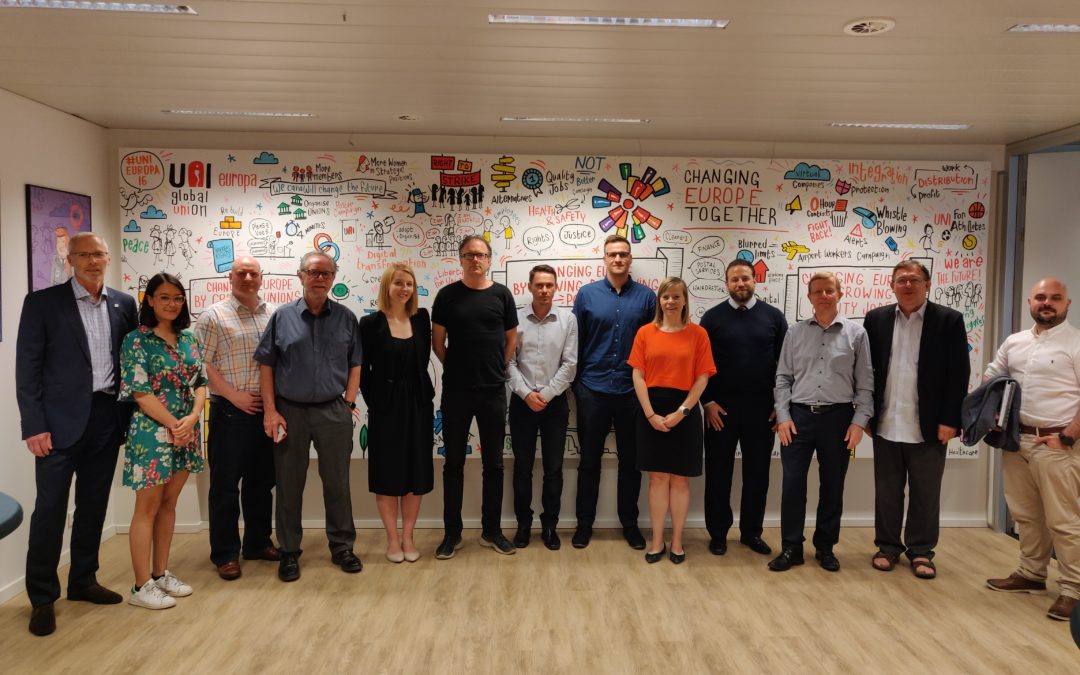 On the 19th of June 2019, the 3rd meeting of the ESSA-Sport European Associations Expert Advisory Group took place in Brussels, Belgium.  The aim of the event was to debate comprehensive sport employment statistics collected at the European level, to discuss the key findings from the first ever European Employer Skills Survey, and to work towards a collective view on priority actions and recommendations for the sector.

The meeting, chaired by the European Association of Sport Employers (EASE) and the European Observatoire of Sport and Employment (EOSE), gathered 17 participants representing 12 European associations and network organisations involved in the sport sector in Europe.

The European Sector Skills Alliance for Sport and Physical Activity (ESSA-Sport) is a three-year initiative funded under the Erasmus+ Programme of the European Union. The aim is to produce the first EU wide employment and skills map for the whole sector.

The holding of the European Associations Expert Advisory Group is part of the drive within the project to engage and consult the whole sport and physical activity sector in Europe on employment and skills issues.

The ESSA-Sport partnership has gathered available data at the European and national level on the number of people employed in the sector, with further analysis looking at characteristics of the workforce including gender, age, level of education and type of contract.

The overall working methodology was presented and some of the key findings discussed by the group including:

62% of the labour market being present in four countries: UK, Germany, Spain, France

There is a higher proportion of young workers in sport than the average across all sectors in the EU, 21.7% in sport versus 8.5% in all sectors

It is important to test statistics with experts who understand the real situation in the sector. Overall the group felt the figures looked credible and realistic.

There was some surprise at the high percentage of female workers in the statistics (45%), there is a need to look at the jobs they are performing but the group felt it is encouraging nonetheless.

While the age range of sport workers was as expected the group felt the sector should prepare for a generational shift as the current workforce with a large proportion in the middle age band moves towards retirement age.

The group also felt the higher than average number of self-employed people in the sector pointed to the need for business skills training and developing entrepreneurship skills in the workforce.

The number of professional athletes and players in the figures was thought to be lower than the real number of people holding contracts and receiving payment to compete in sport.  The possible reasons for this were discussed.

The group would have liked to see more information on the effect of seasonal work on the figures as this type of work figures strongly in the sport sector. This is unfortunately very limited within available statistics.

Overall the group felt the quality and level of detail in the figures and graphs presented will provide a quality resource for the sport sector, which will be of great value to employees, students, job seekers, sport associations, policy makers, academics and employers.

It was agreed by all that regular collection of such data will be beneficial to the sector, and it would also be useful to work with Eurostat to look at the potential for refining the data and the classifications applied to sport to aid analysis within the sector.

The event gave the opportunity to present the findings from the first ever European Employer Skills Survey for the whole sport and physical activity sector. The survey had been available across Europe, in 20 languages.

It was agreed that EOSE should carry out these surveys on a biennial basis, working wherever possible with national partner organisations to optimise responses and improve the sample so that it is more representative of the EU workforce as a whole.

80% of organisations expect their workforce to stay the same or grow, showing a stable and growing sector.

Over 82% of organisations represented engaged volunteers.  This demonstrates their importance to the sector

Many barriers to training staff are reported to be related to finance and the availability of relevant and accessible training.

The main training needs for each occupation included in the study were also discussed by the group.

The group discussed the role of volunteers in sport and particularly the fact that 50% of respondents have the same expectations of volunteers as for paid staff.

Discussion of the results for employment opportunities resulted in agreement that developing methods to promote career progression and transition is important, and this can include a “recognition of prior learning – RPL” process – particularly for volunteers who may have acquired many skills but have no credit for these.

Training needs were determined by looking in the figures at which skills were seen by respondents to be both important in their workforce but also with a high level of weakness. It was observed that soft skills such as communication are seen as an important training need in all occupations.

In the section on recruitment, lack of skills was seen as one difficulty and the group felt this could be explained by an “over supply” of graduates in the sector with high education but sometimes without required skills.

Finally, under training issues, the group agreed that it is important to exploit technology and distance learning, as one response to tackling issues of finance available for training in sport organisations and the accessibility of relevant courses.

The discussion at the event was invaluable to allow the partners to go forward with the development of the ESSA-Sport European Report, which will contain a summary of the findings from the project (employment data and employer survey) and produce recommendations for the sector.

Participants in the working group were thanked for their contribution towards producing the recommendations.

The next major event in the calendar for the ESSA-Sport project will be the first EU Sport Summit on 07-08 October 2019 in Helsinki, Finland. The project will finish at the end of October and the partners look forward to publishing all results and findings as well as recommendations and action plans for the development of employment and skills in the sport sector at both national and European level.