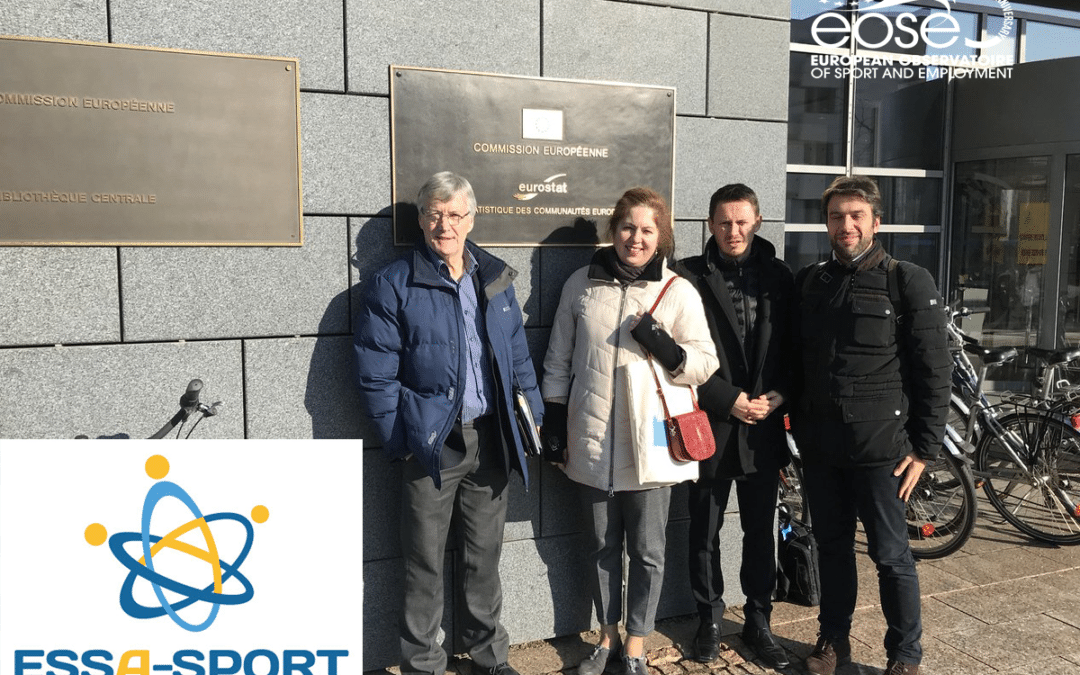 Representatives of the ESSA-Sport Research Team, led by Vilma Cingiene (Mykolas Romeris University, Lithuania) and Simone Digennaro (University of Cassino, Italy) under their capacity as reseachers, and accompanied by EOSE staff members, Aurelien Favre and Stephen Studd, held an important second meeting with experts from the culture and sport team at the Eurostat Offices in Luxembourg on 5th February.

The meeting enabled the EOSE envoy team (Vilma Cingiene and Simone Digennaro are also EOSE Executive Board Members) to explain the ESSA-Sport project in detail and to enlist the help and support of Eurostat in assisting the ESSA-Sport national coordinators to compile the most extensive and accurate analysis of the sport and physical activity labour market possible.

An analysis of the labour market and an assessment of the skill priorities is a fundamental aspect of this ground-breaking project and our national members have been working with their national statistics organisations over recent months to try to compile the best possible profile of the national labour markets and the meeting with Eurostat gave the opportunity to discuss the issues and challenges that had emerged in the national research and the remaining feeling that national statistics were still underestimating the real labour market in sport. Indeed it is a complex scenario with employment expanding beyond pure sport organisations to embrace employment on education sites, in municipalities, in companies focussed in tourism and hospitality (e.g. hotels, residential centres, outdoor activities) and so on, where sport is a key service. In addition, the prevalence of self-employment and people having second jobs in sport creates another complex statistical challenge but is a growing dimension of the sector.

The meeting enabled these issues to be discussed and a promise from Eurostat to explore new sources of data, and an agreement to further co-operation. It is hoped new statistics can be provided in the coming weeks to ESSA-Sport national coordinators as this stage of the ESSA-Sport research phase draws to a close.

Understanding who the employers are in the sector and who they employ will provide the starting point for an EU wide consultation exercise in 2018 .