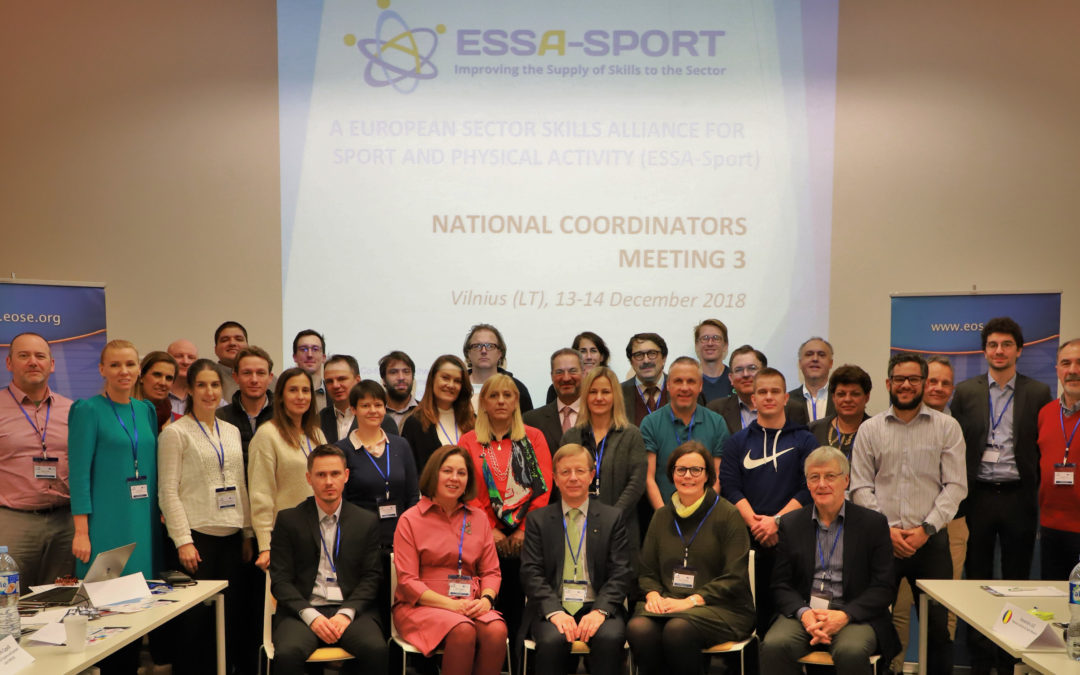 On the 13th of December 2018, the National Coordinators for the European Sector Skills Alliance for Sport and Physical Activity (ESSA-Sport) met in Vilnius (Lithuania) hosted by project partner MRU and at the invitation of EOSE, the applicant and coordinator of the project which is funded by the European Commission under Erasmus+ to deliver the first European wide employment and skills map for the sport and physical activity sector.

This third project meeting gathered 34 participants from 20 countries and also two European organisations: the European Association of Sport Employers (EASE) and the European Network of Outdoor Sports (ENOS), and also IHRSA, which operates in health and fitness at the global level.

Mr. Marius Vaščega, Deputy of the Head of the Representation of the European Commission in Lithuania and Mrs. Kornelija Tiesnesytė, acting Director General of the Department of Physical Education and Sports under the Government of the Republic of Lithuania opened the session with a warm welcoming message.

Following a rapid tour de Table and presentation of attendees, Aurélien Favre, EOSE Executive Director provided the context and main objectives of the day, and reminded delegates about the policy background and overall project journey.

Aurélien Favre presented the progress made by the national coordinators on data collection in order to identify the number of people employed and the characteristics of the workforce in the sector at both European and national level.

It was the occasion to present the labour market data collated through Eurostat and the National Statistics Offices by gender, type of contract, age and level of education. This presented EOSE’s new definition of the labour market and highlighted key characteristics of the growing and changing nature of employment in the sector.

The group then debated the content stressing that there can be reasons for the statistics not always reflecting reality in every situation.

>> The European Employer Skills Survey for Sport and Physical Activity

Simone Digennaro, researcher from UNICAS, displayed the first findings for the European Employer Skills Survey including the high number of 2281 responses collated so far from all over Europe (dated 5th of December). He reminded delegates of the unique opporutnity of such wide survey and so the necessity to still try to increase this number of contributions to ensure a right balance between countries and type of organisations having responsed. The aim is to correct the disparity of responses between countries. Simone then presented the main features of the organisations that have filled the questionnaire.

Whilst this was an early picture of the results, it gave a good indication of the issues that are important to employers and would help shape the next stage of consultation. It was agreed that the survey would remain live until 25 January 2019.

EOSE Director of Standards, Ben Gittus, took the lead for the final part of the meeting. The participants were split up in working groups in order to gather ideas and inputs from them all as regard the upcoming National Report which will be written for each partner country. Ben presented the proposed common structure of the report before dividing the group to focus on the format for the section on he development of strategic action planning and concrete recommendations.

Very interesting ideas were provided by the groups including the general framework for writing the recommendations which was agreed but also on the actual content. Ben Gittus finished the presentation with national reports timeline thanking everybody for active contribution.

Aurélien Favre closed this very productive day by a recap of the situation reminding that this project is a unique opportunity for our sector. Aurélien finally concluded with the next steps and a warm thank you to the attendees for their active participation and motivation. 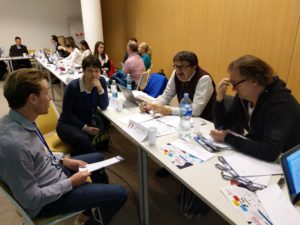 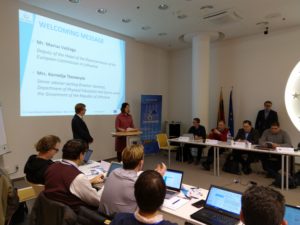 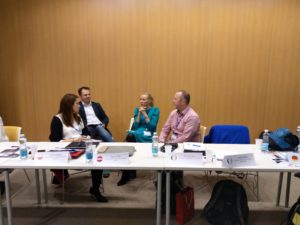