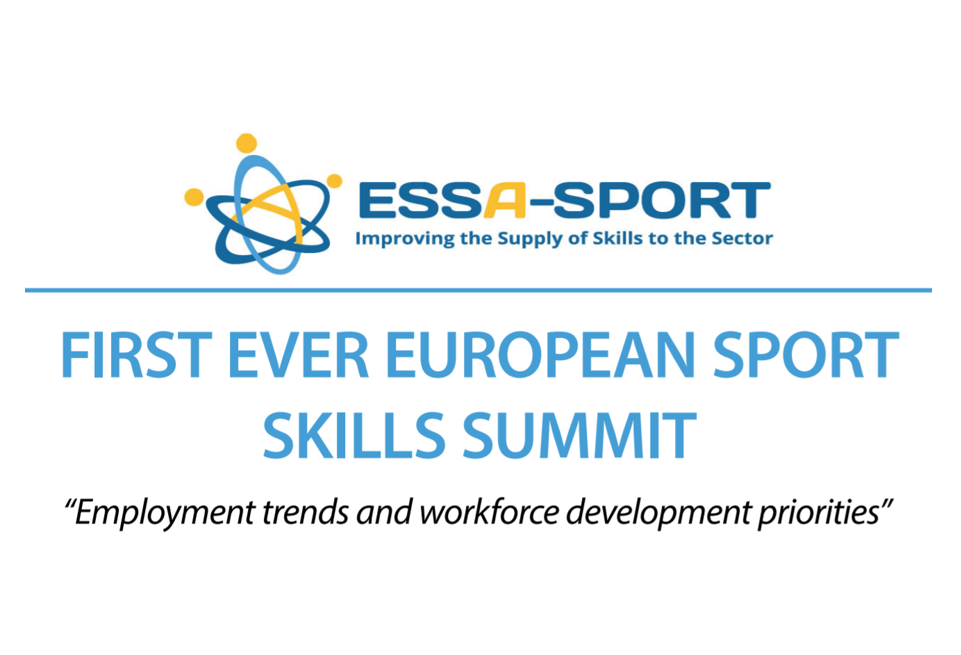 The 7th and 8th of October 2019 saw 82 participants from 24 countries come together in Helsinki, Finland, to discover and debate new data and information about the sport sector.

The European Sector Skills Alliance for Sport and Physical Activity, known as the ESSA-Sport project, has been running over three years and the first ever European Sport Skills Summit was the final conference where ground-breaking research covering labour market statistics and skills needs at the European level could be presented to a wide range of stakeholders from across Europe.

The event was hosted by the Finnish Ministry of Education and Culture and was run as a side event of the Finnish Presidency of the Council of the European Union.

The first speaker at the event was Tiina Kivisaari, Director of the Division for Sport in the Finnish Ministry of Education and Culture. After welcoming delegates to Finland, Tiina presented the Finnish Act on the promotion of sports and physical activity and current priorities in Finnish sport policy.

Thierry Zintz then introduced the work of EOSE in his role as president of the organisation. Next, Mairit Pellinen representing Sport Institute of Finland and Haaga-Helia University of Applied Sciences welcomed delegates and briefly presented vocational and higher education in sport sector in Finland.

Delegates were very interested to hear from Agata Dziarnowska from the European Commission Sport Unit. Agata presented the rationale for the EU’s involvement in sport and the current EU Work Plan for sport. Skills is a key topic for the EU in the field of sport and Agata presented the work of the Expert Group on Skills and Human Resources Development in Sport in which EOSE is involved as Observer. Erasmus+ Sport is a key funding programme and Agata presented the profile of funded projects from the 2019 Call and the current and future budget for the programme. Agata closed by discussing the SHARE initiative which aims to raise awareness of the role of sport for local and regional development.

Stephen Studd, past president of EOSE, then provided information about the realities of the sector, set the scene for the research which would be presented at the Summit and introduced the ESSA-Sport project. The aim of this 3-year EU-funded project (Erasmus+) was to undertake a wide desk research, a European Employer Skills Survey and European / national consultation activities to develop a common understanding of the main characteristics and tendencies EU-28 labour market in the sector. Stephen presented ESSA-Sport as a unique opportunity:

To close day 1, Aurélien Favre, Executive Director of EOSE, presented the results of one of the two main themes of the project: European sport labour market statistics.

After presenting the methodologies of data collection, which involved working with the European statistical agency Eurostat and national statistics offices, and the statistical definitions used in the ESSA-Sport project, Aurelien presented the main findings from the gathering of labour market data at the European level. Aurelien presented the findings for the sport sector as a whole and for those specifically in sport specific occupations; key findings included:

This covered all occupations employed in the sector including non-sports-specific workers such as management and clerical workers. He underlined the following findings:

That brought day 1 of the Summit to a close, in the evening delegates enjoyed a networking dinner.

Day 2 began with a key note presentation of the main findings of the European Employer Skills Survey, delivered by EOSE Director of Standards, Ben Gittus. Ben was supported in the presentation by Steven Osborne representing the European Association of Sport Management (EASM).

Ben presented the background to the survey, how it was distributed and the profile of the 3,812 responses collated from across Europe.

A key finding from the survey related to the optimistic view of employment with 29.4% of respondents anticipating an increase in their workforce over the next two years and only 7.6% predicting a decrease. This shows the stable and growing nature of the sport sector.

Ben also presented main reasons for difficulty in recruiting and main reasons for low retention which included issues such as low numbers of applicants with the required skills and attitudes, better pay offered by other jobs and organisations and lack of career progression opportunities.

Ben went on to cover findings related to training and barriers to training, the main barriers underlined by employers being the lack of funds for training and courses not available locally.

Finally, Ben presented key issues where there was an overwhelmingly positive response from respondents:

It was noted that the labour market statistics only covered paid workers and we currently have a dearth of data on the size and nature of the volunteer workforce which is crucial to the sector.  58.42% of respondents reported that they engaged the services of volunteers on a regular basis and24.06% said they did so occasionally. It was also clear that respondents placed a high value on the skills of volunteers and the majority had high expectations of contributions volunteers can make.

Following Ben’s presentation, delegates had the opportunity to discuss and debate the findings from the labour market statistics and employer skills survey results. Four working groups met for two hours to discuss the key issues and main findings. Delegate responses were overwhelmingly supportive of the research with the findings stimulating lively discussion and debate in all groups. It was stressed that the ESSA-Sport project has not finished yet and the feedback from the working groups will inform the final report of the project. Four rapporteurs took notes in the working group sessions and reported the main discussions from each group in a plenary session.

The successful European Sport Skills Summit concluded with feedback from the groups and the EOSE Skills Development Manager, Geoff Carroll, presenting preliminary priority actions for the sector arising from the findings. These were grouped under the following headings:

EOSE and the ESSA-Sport partnership were delighted with the quality of the discussion and input from delegates at the first ever European Sport Skills Summit, they will now move on to the final stages of the project to produce 28 National Reports and a European Report presenting and discussing all findings from the project and crucially presenting priority actions for the sector at the national and European level.

DOWNLOAD THE EUROPEAN FACT SHEET
TAKE A LOOK AT THE PICTURES